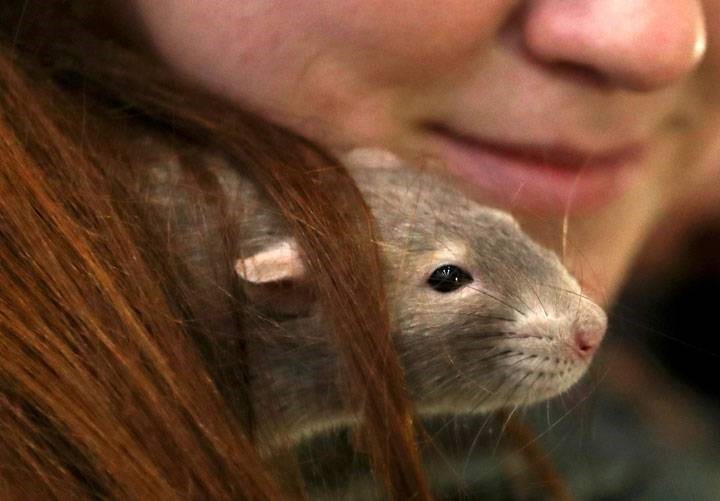 A 36-year-old woman in France caught a serious bacterial infection from a pet rat, according to a case study published in the New England Journal of Medicine.

According to the report, the woman went to an infectious diseases clinic after suffering fever, headache and joint and muscle pains for three days. She told doctors she had been bitten by a pet rat 10 days before.

Doctors found a bumpy rash on her feet and hands and noticed that her right ankle, left knee and left wrist were swollen and tender.

They admitted her to hospital and treated her with an antibiotic. A blood test confirmed what they had suspected: an infection of Streptobacillus moniliformis, commonly known as “rat-bite fever.”

Streptobacillus moniliformis is a bacteria commonly found in the mouths of rats and other rodents, according to Dr. Jason Stull, a veterinarian and assistant professor at the Atlantic Veterinary College at the University of P.E.I.

“The rats live normal lives with this bacteria in their mouths,” he said, and won’t display any negative symptoms themselves. It’s people who suffer through contact with the bacteria.

It’s often transmitted to people, yes, through bites, but he said it could also happen through licking, petting, cleaning a cage or letting a rat eat from your mouth.

“Some people may nuzzle with them, they may kiss the rat. They may allow the rat to take food out of their own mouths. So any type or kind of close contact between an individual and that rat can lead to transmission,” he said.

It’s not just pet rats who carry the bacteria, either, he said — their wild cousins do, too. The infection can’t be passed between humans.

Fortunately, the disease is easily cured with common antibiotics, but if left untreated, it can have serious consequences like heart and brain infections and even death. A 10-year-old from California died after contracting rat-bite fever from his new pet in 2013.

According to the U.S. Centers for Disease Control and Prevention, about one in 10 people with rat-bite fever die.

In this recent French case, the woman’s infection was successfully treated. She was released from hospital after seven days and remained well at a followup exam three months after.

Diagnosing the disease can be tricky, Stull said, since many of the symptoms are non-specific and many patients might neglect to mention to their doctor that they have a pet rodent, or the doctor won’t think to ask. But the rash, if present, provides a good clue, he said.

Because rat-bite fever isn’t a reportable disease, it’s hard to know exactly how common it is, Stull said. According to a published paper on the topic, there were 11 cases on Vancouver Island between 2010 and 2016.

As rats and other rodents become more popular pets, Stull thinks people should be aware of the risks and how to protect themselves.

“This bacteria, it’s in their mouths, and we’re not going to get rid of it,” he said. Giving the rats antibiotics won’t help.

Bite and scratch prevention is one of the most important things to think about, he said. This means things like how to properly handle a rat so it doesn’t get scared or uncomfortable and bite as well as recognizing the signs that it’s afraid and more likely to bite.

Would you adopt a rat? Vancouver wants you to try

Handwashing is important, too, he said.