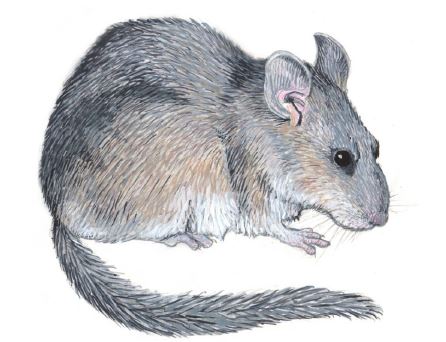 The bushy tailed woodrat is the only native rat found in Canada. It is immediately distinguished from the introduced Norway and Roof rats by its bushy tail.

It is a large, gentle, squirrel-like rodent. Its adult fur coat is long, soft, dense, usually grey on the back and with tawny brown sides. The undersides and feet are white.

Woodrats are active all year and primarily solitary and nocturnal. They are most active during the first half hour after sunset and dawn. One individual to 20 acres is an average density in its preferred habitat.

Their presence is characterized by their large bulky residence composed of twigs, bones, foliage, debris and all manner of human artifacts, some containing up to three bushels of material. Their actual nest is sited in the centre of this mound, and is made of shredded bark, grass and moss — and if in human environments, soft, shredded cloth, cotton batting, wool, etc. The nest itself is tidy but nearby are the toilet areas, where the waste encrusts and stains and cements loose debris to the rocks.

For food, they prefer the leaves of aspen, willows, roses, cherries, currants, snowberries and elderberries, but will also eat the twigs and needles of Douglas-fir, Alpine Fir, Englemann Spruce and junipers. They also use the seeds and fruit of Douglas-fir, anemones, gooseberries, cinquefoils, raspberries, fireweed, gentians, elderberries, honeysuckles and goldenrod. In autumn, they are provident, collecting and curing the available food items, and stockpiling them in crevices and under large boulders for their winter needs.

Beginning in February, the male meet up with a female and pursues her until they mate in March. The gestation period is 27 to 32 days. After the young are born, the female, who is dominant, drives out the male. The litter size is one to six (average 3.5). Under favourable conditions, two litters, about two months apart, are produced, but in the northern part of its range, usually only one. The young are weaned at age 26 to 30 days and reach maturity when about eleven months old.

This rodent is not considered to be in jeopardy and is, therefore, not protected (Stevens and Lofts 1988).

Habitat requirements
The bushy-tailed woodrat requires habitat that offers good security cover. Activity is significantly higher in areas that have 75 to 100% cover than in areas with less cover. The cover provided within rocky habitats such as talus slopes, caves, cliffs, river canyons, and rock outcrops in open forests appear to be favorite habitats for this woodrat.  In the absence of rocky habitat, security cover can be provided by logging slash, hollow logs, abandoned buildings, and mine shafts.

Woodrat habitats provide woodrats with a suitable sites for building their stick “houses”. Woodrats owe their other common name of pack rat to their association with stick houses, which are generally quite large (1 to 1.8 m in height) and built out of woody debris, dried vegetation, and other objects the woodrat can collect, including human artifacts such as silverware, jewelry and clothing. These houses are preferably situated within the shelter of a rocky overhang, but can sometimes be found in the open or even up a tree.

Although they are often referred to as houses, the piles of debris created by woodrats do not often function as shelters and woodrats do not usually reside therein. Large woodrat piles function more as a storage dump than a house. Their true nests are small (about 15 cm in diameter), cup shaped, and are made up of finely shredded bark and other soft materials such as fur. These nests may be found within the larger stick house, but are more commonly found in a sheltered spot nearby.

Food habits
The woodrat is an omnivorous rodent that will make a meal out of a variety of plants, insects, small amphibians, and carrion. The majority of the woodrat’s diet is comprised of green and dry vegetation. Preference is shown for the foliage of herbs, shrubs, and trees, but not grasses. They also feed on the vascular tissues of Douglas-fir, Sitka spruce, and western hemlock. Willow leaves are also a favoured food.  Bushy-tailed woodrats stockpile large quantities of dried vegetation to sustain them throughout the winter months.

Bushy-tailed woodrats are a solitary species that defend territories. Males spend considerable time marking their territory with their ventral musk glands, which they rub on toilet posts, food caches, and nests.

Seasonal activities and movement patterns
The bushy-tailed woodrat does not hibernate, instead it actively prepares for the winter by stockpiling a cache of vegetation, which it gathers and dries in the sun during the growing season. Winter months are primarily spent below the snow among the cover provided by their rocky habitat, however, short trips may be made over the snow’s surface.

Woodrats remain solitary, except during the breeding season, which in British Columbia begins in late March and lasts until late May. After a gestation period of 27 to 32 days females give birth to an average of four young (range of one to six) during early May to late June. Several authors report that the bushy-tailed woodrat has multiple litters per year however within British Columbia, the woodrat is commonly reported as having only a single litter per year.

Bushy-tailed woodrats do not travel significant distances throughout the year (with perhaps the exception of dispersing juveniles), remaining in the near vicinity of their stick houses and nesting sites.

Good indicators of bushy-tailed woodrat presence are the deposits of urine and feces that accumulate within this animal’s home range. Feces and urine can form a thick tar-like substance (often mistaken for some kind of mineral), if deposited in a spot sheltered from the rain, such as within a cave or under a rock overhang. Bright white streaks result from urine deposited on rocks not sheltered from the rain. The rain is thought to leach out the organic components of the urine leaving a white calcareous deposit behind. These white deposits are useful sign to look for when sampling for bushy-tailed woodrats, as they can be observed from a distance and are often indicative of occupation (or former occupation) of an area by a woodrat.

Because feces and urine deposits are very persistent, lasting for thousands of years in sheltered areas such as caves, and decades on exposed surfaces such as cliffs, care must be taken not to confuse past use of a site with that of current use. Simply locating fresh streaks of urine can quickly answer this question. Fresh urine can be recognized by its transparent yellow to opaque brown colour, skunky odour, and stickiness.

Bushy-tailed woodrats are or have recently been present in a study area if an investigator discovers the large stick “houses” used by this woodrat. These structures, made primarily out of woody material and a variety of other debris, are often located in a sheltered area such as a cave, under a rock ledge, within an abandoned building, around the base of a tree or log, inside a hollow snag, or sometimes even up a tree. Although woodrat “houses” are usually not placed in the open, because of their large size (0.9 to 1.8 m), they can usually be spotted with relative ease.

Damage caused by feeding and construction

Because the bushy-tailed woodrat is an animal that feeds on a large variety of plants within its home range, clipped shoots and branches, with the usual oblique cut common to most rodent feeding scars, are possible indicators of woodrat presence. However, such feeding sign is difficult to distinguish from other rodent feeding damage. A less ambiguous sign produced by this woodrat, are the patches of bark removed from the boles of trees for nest construction. From a distance, this debarking may be confused with that of the porcupine or tree squirrels.  Unlike the tree squirrels that discard the bark and feed on the exposed sapwood, the bushy-tailed woodrat transports all of the removed bark to its nest for construction. Therefore, there will be no discarded strips of bark found beneath the trees damaged by bushy-tailed woodrats, as there would beneath trees damaged by tree squirrels or porcupines. In addition, woodrats do not feed on the sapwood, rather they just remove the outer bark (often the sapwood is not even exposed), whereas, porcupine and tree squirrel feeding will always expose the sapwood.