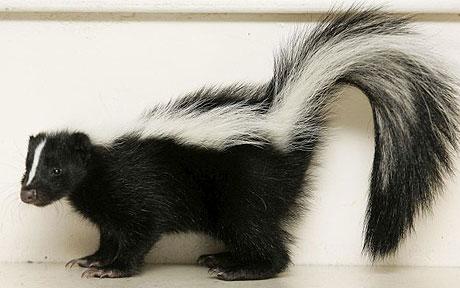 Skunks have become accustomed to humans, thriving in semi-open agricultural areas, mixed woods, meadows and even urban areas.  In the fall, skunks feed voraciously, building up fat reserves for winter dormancy.  With the onset of cold weather, skunks seek out dens, becoming inactive for the winter. Areas that provide dark secure hiding places such as under barns, utility sheds and porches are common denning sites. They may appear for short periods in winter during prolonged mild spells. Mating occurs in late February and early March when males become active, leaving their dens in search of females.

After a gestation period of 62 days, females produce five kits on average with the young being born in late April or May. Within a month, the females and young can be seen actively foraging for food. Skunks are omnivorous, eating both animal and plant material, with insect larvae forming a large part of their diet.

The Great Horned Owl is their main natural predator but coyotes, foxes and dogs can take the occasional skunk. Vehicles and disease are other causes of mortality. Skunk numbers are periodically reduced with outbreaks of distemper.

Skunks in the Urban Environment

Skunks readily adapt to the urban environment and their offensive odour and habit of digging holes in lawns in search of insect larvae, make it an unwelcome urban resident.  Irrespective of chance encounters by family pets, the skunk can be beneficial to homeowners when foraging for June bug larvae.  June bug larvae feed on grass roots resulting in damage to the lawn and in cases of severe infestation can kill large areas of grass.

Traps suitable for live-trapping skunks can be rented, purchased, or constructed. Local rental agencies have a number of traps available at a reasonable fee or they may be purchased from a hardware store. On the other hand, a suitable trap is easily constructed from scrap material using the plan illustrated.

Nuisance animal control operators can trap problem animals for a prescribed fee.  There are a number of licensed individuals who are prepared to assist anyone with a skunk problem.

June bugs mate in May and June and are attracted to yard and window lights. The use of amber coloured lights and the drawing of window blinds in the evening will lessen the attraction of June bugs to a property. Fewer June bugs will result in fewer larvae. As well, you can treat the lawn with insecticides to reduce the incidence of larvae. Insecticides are available from farm and garden supply stores.  Garbage left out-of-doors in unsecured containers is not only a source of food to local cats and dogs, but to skunks as well. Garbage should be confined in a secure container indoors.

Utility buildings and porches that have no secure foundation are open invitations to skunks as denning areas. Concrete foundations or wire screening extending into the ground will make these areas inaccessible to skunks.

Always check provincial and municipal regulations before disturbing any wildlife. Skunks can be trapped at entrances of known denning sites, or trapped about their feeding areas. A wooden box trap with a wire mesh end is ideal. Leg hold traps or any kill device such as a conibear trap should be avoided. Skunks caught in box traps can be safely moved if caution is taken to avoid shaking the trap. Wire mesh traps must be carefully covered with a cloth material before moving.   To release an animal, the door is opened permitting the animal to leave on its own, unmolested. It is advisable to stand upwind when releasing an animal.

The following recipe was developed to neutralize the odour-causing compound in skunk spray.

Mix the above together in a plastic bucket and wash the infected object, be it human, canine, feline, garage, shed, car basement, etc. Make sure you keep the solution away from eyes, nose and mouth. The skunk odour should disappear immediately!

This product is fast and safe – and best of all, it works!