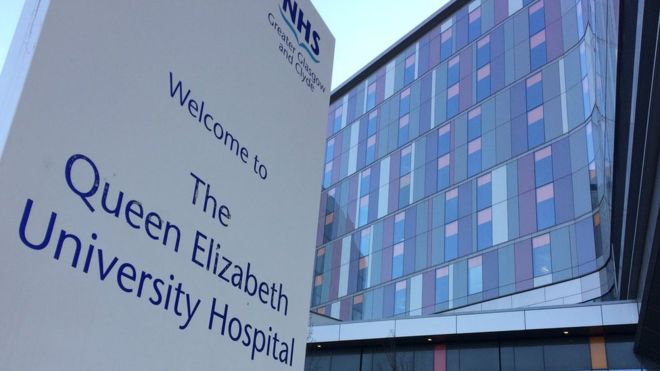 Two patients have died after contracting a fungal infection caused by pigeon droppings at the Queen Elizabeth University Hospital.

NHS Greater Glasgow and Clyde said an elderly patient died but from an unrelated cause.
Another infected patient has also died but the factors contributing to the death are still being investigated.

A non-public room, thought to contain machinery, was identified as a likely source. An investigation is under way.
A NHSGGC spokesman said: “Our thoughts are with the families at this distressing time.
“Due to patient confidentiality we cannot share further details of the two cases.
“The organism is harmless to the vast majority of people and rarely causes disease in humans.”

NHSGGC confirmed a small number of vulnerable paediatric and adult patients are receiving medication to protect them against the airborne infection, which is a Cryptococcus species.
Portable HEPA air filter units have been installed in specific areas as an additional precaution.

Earlier on Saturday Teresa Inkster, lead consultant for infection control, said: “Cryptococcus lives in the environment throughout the world. It rarely causes infection in humans.
“People can become infected with it after breathing in the microscopic fungi, although most people who are exposed to it never get sick from it.

“There have been no further cases since the control measures were put in place.”
Ms Inkster said experts are continuing to monitor the air quality.
She added: “It remains our priority to ensure a safe environment for patients and staff.”

‘Very unusual’
Prof Hugh Pennington, of Aberdeen University, said he was surprised to learn of the infection.
The epidemiologist said: “It is very unusual in the UK.
“It is quite common in other parts of the world, particularly in tropical parts and in the US and in countries like that, where they have more problems with this particular kind of fungus.”
Prof Pennington said people with weak immune systems are most at risk.
He added: “When it gets into the blood stream a lot of people have fairly straightforward infections and it settles in the lungs but the big problem with this is that it can cause meningitis and, as we know, meningitis can be a very serious infection.”
Prof Pennington said anti-fungal drugs are used to treat the infection but warned it can be fatal if it is not diagnosed.

Airborne infection
The expert said a key priority would have been stopping the airborne infection from entering the hospital’s ventilation system.
He added: “Obviously they have stopped the pigeons getting into the machine room.
“It surprises me slightly that there was any there in the first place.”
During the investigation, a separate issue arose with the sealant in some of the shower rooms.

NHSGGC said repairs are underway and our maintenance team are working to remedy this issue as quickly as possible with the minimum disruption.
As a further precaution, a specific group of patients are being moved within the hospital due to their clinical diagnosis and ongoing treatment.

The £842m QEUH opened in April 2015 and featured in the BBC series Scotland’s Superhospital.