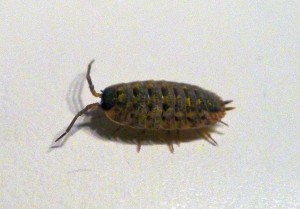 Sowbugs are land crustaceans which look very similar to pillbugs, at least at first glance. Sowbugs are small crustaceans with oval bodies when viewed from above. Their back consists of a number of overlapping, articulating plates. They have 7 pairs of legs, and antennae which reach about half the body length. Most are slate gray in color, and may  reach about 15 mm long and 8 mm wide.

The pillbug on the other hand has a rounder back, from side to side, and a deeper body, from back to legs. When disturbed, it frequently rolls into a tight ball, with its legs tucked inside, much like its larger but dissimilar counterpart the armadillo.

Sowbugs have gills which need constant moisture, so they tend to live in moister northwest climates. They are primarily nocturnal, and eat decaying leaf litter and vegetable matter. They may also feed on the tips of young plants, so can be considered pests, but they also help the environment by breaking up decaying plant matter and help speed up the recycling of the nutrients they contain.

The presence of sow bugs or pill bugs  in the living quarters of a home is an indication high moisture conditions. This condition will also contribute to a number of other problems including mildew, wood rot and a good breeding environment for other insects.

A perimeter pesticide spray may help break the cycle for a short time but will not eliminate the problem permanently. Remember, if you don’t solve the moisture problem, the bugs will return no matter what chemicals you use, or how much you use them.

Structure, Appearance and Characteristics
Oval body, convex above and flat or hollow beneath.
Pale brown to dull blue in colour.
Can grow up to 19mm in length.
Head and abdomen are small.
Head has eyes and prominent segmented antennae.
Thorax is comparatively large and is composed of 7 hard individual but overlapping plates.
7 pairs of legs.
Mostly active at night.
2 prominent tail-like appendages (processes) from abdomen.
Become inactive during winter months because of temperature.
Depend on moisture to keep oxygen-absorbing gills under their bodies moist.
Life Cycle

Female gives birth to numerous, live young and carries her young in a pouch (marsupium) on the underside of the body. The brood is carries for an average of 44 days. Usually 2 new generations are produced per year depending on environmental conditions with an average of 28 young in brood. New generation are white in colour. 1st moult within 24 hours (7th pair of legs appear after 1st moult). 2nd moult during 2nd week. 3rd moult during 3rd week. 4th instar moults every 2 weeks until the animal is 20 weeks old. After 20 weeks, periods between moults are irregular.

Habitat
Prefer moist locations and are found under objects on damp ground or under vegetable debris. Have been known to bury themselves under several centimeters of soil. Can at times invade damp basements, fern houses and first floors of houses indicating large number present outside the house nearby.

Pest Status
In rare instances can become pests of young plants (especially in fern houses where climatic conditions are ideal). The slater does not bite and is harmless. In unusual climatic conditions (extreme wet), they can invade houses in large numbers creating concern for occupants. Their presence though is short-lived because these animals die from desiccation. Neither adults nor young are considered pests.

Control
Habitat and food requirement leaves wide variety of areas to inhabit in gardens etc. Because of this need they cannot survive away from its ideal environment thus it will not breed or survive for long indoors. A high degree of moisture is required for survival.

Sow Bugs and Pill Bugs In The Garden

Are They A Pest?
These bugs play a vital roll in composting organic matter in the garden and compost bins. They can be more effective making soil than earthworms.

Sowbugs and pillbugs get blamed for more damage to garden plants than they actually do. They are deemed guilty as they are often found feeding in decaying or damaged garden produce, after diseases, slugs and other pests have inflict the initial damage. They are great opportunists.

Most annoyingly, sowbugs and pillbugs feed on tender seedlings, young roots, flowers and fruits and vegetables laying directly on damp soil. Most active at night, sowbugs hide in dark, moist protected areas during the day, such as under flowerpots, decaying leaves on the soil surface, boards, mulches and ground cover. They thrive under sprinkler irrigation.

How to discourage sow bugs in the garden

> Limit moist, dark hiding places. Clean up organic debris, boards, boxes and piles of leaves around the yard and garden.

> Water early in the day so plants and the soil surface dries out by the evening when sow or pill bugs are active.

> Mulch with coarse materials, so water passes through to the soil quickly.

> Elevate fruits and vegetables off the ground with old strawberry baskets or pebbles. Black plastic mulches are good because they get too hot in the summer to provide desirable shelter for sow bugs.

> Plant seeds deeply and do not water until seedlings have their first true leaves. Or start seedlings indoors. Then to maintain good drainage, transplant seedlings into the garden so that the soil around seedlings is higher than surrounding garden soil.

> A non toxic method for sow bug control is to place a rolled up newspaper tube on the soil surface. Leave it overnight. In the morning, shake out the tubes into a pail of soapy water.

Another less toxic method to control sow bugs is to sprinkle diatomaceous earth directly on the row where seeds have been planted to dry the soil surface enough to discourage sow bugs. Experiment with the amount of diatomaceous earth, as too thin a layer will not be effective and too thick a layer can become like plaster if it becomes wet.

Various species of sow and pill bugs are common around the world but they have many different names.

Some common names are: