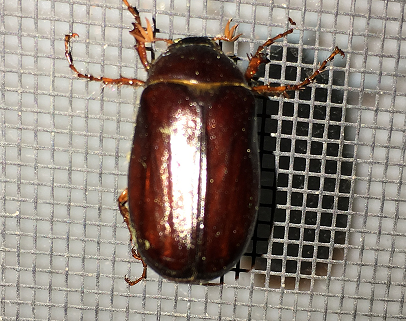 6208  Found this guy on my screen door over the last couple nights around 11 pm. From Prince George, British Columbia.

Number 6208 – This is a type of scarab beetle (Coleoptera: Scarabaeidae) that often are called May beetles or June bugs as they usually are most commonly seen in those months. They are attracted to lights at night, but are rather bumbling fliers and thus frequently seen on the ground under outdoor lights. Their larvae (white grubs) feed on roots of grasses and can be serious lawn/turf pests.