Doing nothing would have posed ‘a risk to bridge failure,’ city says 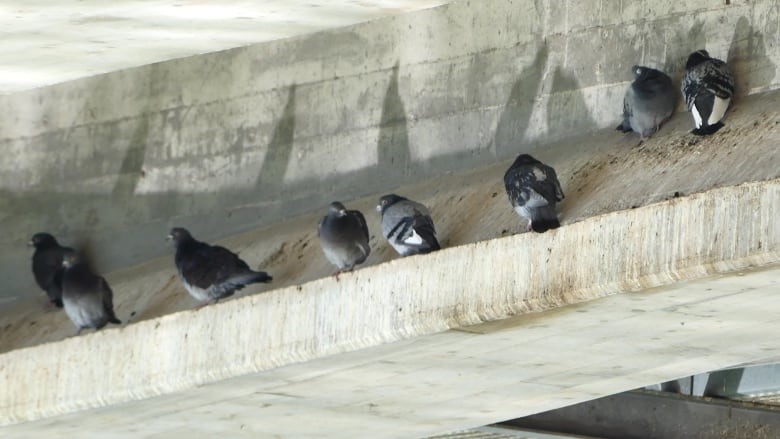 The City of Saskatoon says it spent about $900,000 euthanizing a larger-than-expected flock of pigeons and cleaning out 619,430 kilograms of potentially-damaging bird poop from the Senator Sid Buckwold Bridge over the last eight years. (Guy Quenneville/CBC)

The City of Saskatoon says it spent about $900,000 euthanizing a larger-than-expected flock of pigeons and cleaning out 619,430 kilograms of potentially damaging bird poop from the Senator Sid Buckwold Bridge.

The bulk of the poop removal took place this past summer to make way for workers rehabilitating the 53-year-old bridge. The cleanup, alongside the euthanization program, cost $800,000, exactly on budget.

The city’s latest update, posted on its website, also provides new insight into how potentially damaging the accumulated poop was to the bridge.

‘A risk to bridge failure’

The bridge’s load capacity — including both “live loads” (people and cars) and “dead loads” (the weight of the bridge, including the poop packed into its cavities) — was at its limit, putting the bridge at risk of failure, the city said.

“It was critical to have the additional weight from the pigeon poop removed. Pigeon poop is acidic and known to damage concrete and corrode steel,” the city said.

“The poop was located near critical concrete and steel components of the bridge, which, if not dealt with, would have posed a risk to bridge failure.”

The 619,430 kilograms of poop, packed into the bridge’s underside cavities, was enough to fill about 356 mid-sized cars, according to the city.

The pigeon flock’s size, previously thought to number 1,500, was also underestimated and actually totalled closer to 2,300, the city said.

City official Trevor Bell told councillors earlier this year that the poop had not been regularly cleaned from the bridge in the past.

“I think this is a matter of decades of bird droppings,” Bell said.

‘A pretty dirty place after 50 years’

The prior lack of cleaning has come under scrutiny from a local animal shelter.
“Certainly if you didn’t clean my house it would be a pretty dirty place after 50 years,” said Jan Shadick, the executive director of Living Sky Wildlife Rehabilitation.

The city said the bridge, which opened in 1966, was not designed to make the cavities easy to access.

“The best time for the city to have the work done was during the rehabilitation work,” the city said. “Scaffolding and the proper safety structures were put in place so workers could access these areas.

“It was efficient and cost-effective.”

The waste was removed by either bagging, dry vacuuming or wet vacuuming, and then disposing of it at either the landfill or waste water treatment plant as appropriate, the city said.

Death would have been quick

Shadick also questioned whether killing the birds was the most appropriate method.

The city defended its decision to euthanize the birds.

After considering the flock’s size, the 36 infested cavities, and the likelihood that moving the birds would cause the same poop problem at nearby homes and infrastructure, euthanization was considered the best option, the city said.

The city did not specify how many of the 2,300 pigeons were killed this past summer, just that the flock had been reduced. The euthanization subcontractor was required to kill the birds quickly, as called for by the Canadian Veterinary Medical Association.

Fences and other barriers were installed around the cavities to prevent future infestation.
Now that the flock has been reduced, the city will consider other less invasive methods, such as a falconer.

Workers took care to prevent any poop from going in the South Saskatchewan River, the city added.

What about other bridges?

One city councillor has previously wondered what the situation at the Sid Buckwold Bridge means for the city’s many other bridges.

Coun. Hilary Gough (Ward 2) asked the city’s utilities and environment division this past spring to report back on how it is working to prevent similar infestations at new and future bridges.

“It’s a good thing to be figuring out how we’re gonna do that with the Sid Buckwold bridge,” she said. “But I can imagine that that’s not the only bridge we have pigeons roosting under.”