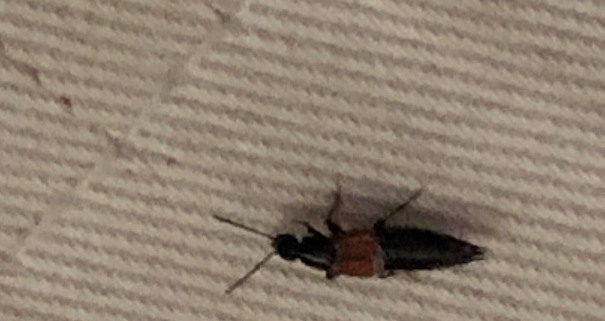 6774.    This bug is only a little over 1/4 inch long. It is black with black legs & a red band around its abdomen. I found several of them crawling around in my office. I’ve seen them flying too, but they are more often found crawling on the floor. They look similar to pictures I’ve seen of earwigs and rove beetles, but I’ve searched online & haven’t seen pictures of either insect that look exactly like this one. Prelate, SK. Canada

Number 6774.  This is a rove beetle (Coleoptera: Staphylinidae). This is a huge family with many thousands of species, so it is little wonder that you were unable to get an exact match for your image. Click here for some examples.

Nymph of a German cockroach
Scroll to top