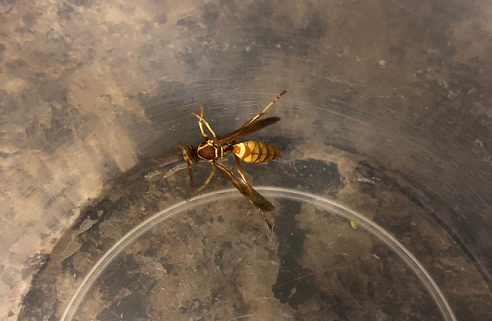 6752.    This insect was found in Brocolli that was purchased at Sobeys in Long Pond NL at 4:30pm Jan 14th, 2020. Store was contacted let them know and make aware of the bug at 5pm same day. The gentleman at the store said he thinks the brocolli came from Nova Scotia, Canada. Conception Bay South, Newfoundland and Labrador. Canada

Number 6752.  This is a paper wasp (Hymenoptera: Vespidae) in the genus Polistes. It most closely resembles Polistes aurifer Click here for an image. This primarily is a western species, but it has been reported from Prince Edward Island before. Like other vespids, it is capable of stinging, but these are not aggressive, and usually will sting only if handled roughly or their nest is disturbed.