You are here: Home / Stored Food and Fabric Pests

Common pests found in and near stored food and fabrics

Description: The adults are 0.1 inches long. This beneficial insect is a general predator that is commonly found in grain storages. The nymphs and adults of this beneficial insect prey on eggs, larvae, and pupae of many species of grain insects, such as the red and confused flour beetle, Indian meal moth and sawtoothed grain beetle. Its generation time is about 16 days at 90 degrees F. Adult female longevity is five to six weeks. The female produces approximately 150 eggs during her lifetime.
Damage: The Pirate Bug is a beneficial insect that is often found in stored corn, but is not injurious to stored grain.

Description: The adults are camel-brown and 0.1 inches long. It is similar to the sawtoothed beetle, but can be distinguished by the lack of projections on the middle body segment. Larvae are white to grayish white.
Damage: This insect is primarily a mold and fungus eater. Its presence may indicate high grain moisture conditions. This insect is a minor pest of stored grain.

Description: The adults are flattened and red brownish in color and 1/12 inch long. The antennae are relatively long, sometimes as long as the body. The flat and rusty grain beetle look very similar. They cause similar amounts of damage and their biology is similar, so it is not necessary to distinguish between them.
Damage: The eggs are deposited on the grain. After hatching the larvae usually feed in the germ layer of the wheat kernel. This insect does not cause obvious feeding damage to grain that the weevils and lesser grain borers do. This insect does not require broken kernels or fine material to survive but will reproduce faster when it is present. It is the most common insect pest of farm-stored wheat and frequently builds up to high numbers.

This small, oval beetle is a common pest of many types of artifacts. The adult is a tiny black beetle with white or lightly colored markings on its back. The larvae are orange-brown in color and look hairy. Warehouse beetles feed primarily on animal products, but will readily feed on grain and cereal products. The hairs of the larvae can cause allergic reactions in sensitive individuals especially when swallowed. Food: This beetle is a voracious feeder and will feed on a wide variety of items including: seeds, dead animals, cereals, corn, corn meal, nut meats, dried vegetables and plant material and fish meal. Life Cycle: The life cycle from egg to adult can be completed in 43 days, but they can stay in diapause (hibernation) for up to two years. Trap Use and Placement: The male Warehouse Beetle is extremely attracted to the pheromone Bullet Lures. No Survivor traps are hung in areas where botanicals are stored. Traps can be hung along a wall or placed on shelves or within drawers where herbarium storage takes place. 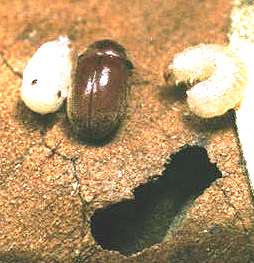 This destructive insect is a serious pest of dried plant material. It can also cause serious damage to books. The Cigarette beetle is a small brown beetle measuring 2-3 mm in length. The Cigarette beetle is closely related to the Drugstore beetle which can cause difficulty in identification. However, with some training they can be distinguished easily. The Cigarette beetle has wings covered in small hairs whereas the Drugstore beetle’s wings have rows of punctations.
Food: This beetle feeds on a great diversity of edible and non edible products. They may infest stored food products such as spices, rice, dry pet foods, as well as seeds, pharmaceuticals, and books among many other materials. It is especially important as a pest of tobacco products.
Life Cycle: Females lay the eggs in the larval food and hatch in 6 to 10 days. The larval period lasts 5 to 10 weeks. The pupal period lasts 2 to 3 weeks. The entire life cycle takes about 10 to 12 weeks. Adults live up to a month.
Trap Use and Placement: There are three trap designs available for this beetle. No Survivor traps are hung in areas where foods are stored, while the Serrico trap and Tobacco Beetle Trap can be hung along a wall or placed on shelves with stored food or on the floor in these areas. These traps should be protected from sunlight and wind during use.

Food: This insect is also a common pest of dried plant matter. It can cause serious damage to books and preserved plant material.
Life Cycle: Females lay the eggs one-by-one in the larval food source. The larval period lasts from four to five months. The cocoon lasts 12 to 18 days. The complete life cycle takes about seven months.
Trap use and Placement: This trap is currently unavailable. Check with Insects Limited for future availability. 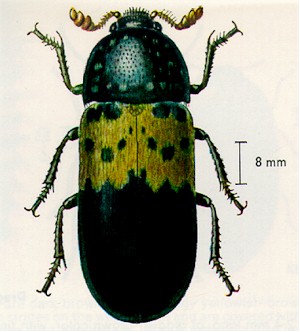 The adult is a dark brown to black beetle, 7 to 9 mm in length, with a pale yellow six spotted band on the back of the abdomen. The undersurface as well as the legs are covered with fine yellow hairs.

Food: Ham, bacon, meats, cheese, dried pet foods, dried museum specimens of all kinds, stored tobacco, dried fish, and all hides. The larvae seem to prefer fatty portions of meat rather than lean muscular portions.
Life Cycle: Larder beetle females lay 100 – 175 eggs. These eggs will hatch in 12 days or less. The larvae will eat constantly until it molts. It will molt 5 – 6 times before pupating. Often times the larvae will burrow into meat or even wood before it pupates. The complete life cycle may be completed with 40 – 50 days.

Several types of weevils, including the rice, granary, maize and bean/pea weevils, can be encountered in the home. They are all pests of whole grain foods such as nuts, beans, cereals, fruits and seeds.
The true weevils (rice, granary and maize weevils) have a long snout on the head. The rice weevil is about 3 mm long dark reddish brown, with four pale spots on the upper surface. The rice weevil can fly and is attracted to lights. The granary weevil is slightly larger (4 mm), of the same body style and entirely dark chestnut-brown. It cannot fly and is not attracted to lights. The maize weevil is also slightly larger than the rice weevil, and it is very dark reddish-brown or black with four yellowish spots. All of these weevils infest whole grain rice, barley, corn, wheat, popcorn, sunflower seeds, nuts, beans and bird seed. They will also attack hard cereal products such as macaroni, dry pet food, cereals and caked flour.
The larvae are white, legless, and feed inside of the whole kernel or seed – hence they are rarely seen. Weevil damaged grains typically are hollow and have small, round emergence holes. The life cycle requires about 4 weeks and there may be three to five generations per year.
The bean weevils are not true weevils; they are members of the closely related bean weevil family. Their body shape is more round than the rice, granary and maize weevils and they do not have the slender protruding snout of these true weevils. The common bean weevil is about 1/8 inch (3 mm) long with the upper surface mottled shades of gray. These feed on dried beans, leaving perfectly round holes in the beans.
Very often, beans are harvested from the garden which look perfectly good. However, there can be been weevil larvae present inside. These larvae can continue to develop while the beans are in storage, with adults emerging during winter. Many a housekeeper has been dismayed to find a good supply of beans ruined by this insect. Heating the beans to 130 degrees F for 1/2 hour prior to storage will kill any larvae present and arrest any further development. A small number of dried larvae in the beans does not constitute any hazard to health.
Integrated Pantry Weevil Management
Purchase susceptible foodstuffs in quantities that can be used in a short time: 2-4 months, if possible. When purchasing packaged food, be certain the containers are not broken or unsealed and that there are no signs of infestation. Check the packages for freshness dates. Once food is in the home, use older packages before newer ones, and opened ones before unopened ones. Storing dried foods in a freezer will prevent insect development. Keep food storage and preparation areas clean at all times; spilled and exposed food attracts insects.
If granary, rice or maize weevils are found in the kitchen, a search of all possible food sources should uncover the source of infestation. Disposal of infested grains and a thorough cleanup of the area should eliminate them.
For bean weevil control, all that is required is to remove the infested beans and clean up the storage area. This pest does not infest as wide a range of stored goods and an insecticide is not recommended.