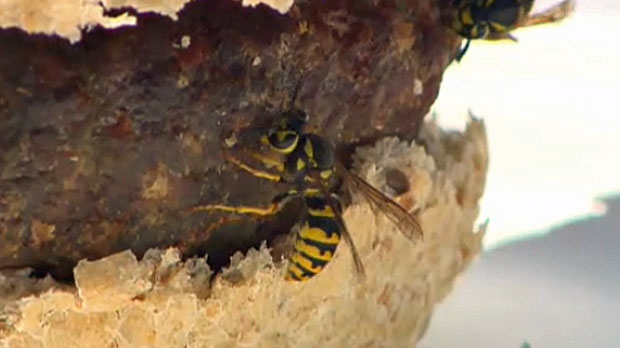 FREDERICTON — A 43-year-old New Brunswick man has died after being stung by a wasp, although his family says he had not previously displayed signs of an allergy.

His father, Terry Koch, said Daniel collapsed within minutes.
The family keeps bees on the property, so EpiPens were on site, but the reaction came on too quickly. Daniel died en route to the hospital after Terry administered an EpiPen and performed CPR.

The coroner told the family that Daniel, a father of one, died from a “severe allergic reaction to a sting,” causing his air passages to close.
Terry described him as a quiet, thoughtful man who put others’ needs before his own — he was looking for the wasp nest because his mother was stung earlier in the week.

But Terry said his son was in good health, and despite being stung by a wasp as recently as last year, Daniel had never shown signs of a severe allergy to stings.

“Actually, when the rest of us got a cold, we’d go to the doctor. When he got a cold, he’d fight it and he always won. I always thought his health was pretty good,” said Terry.

Stories like Daniel’s are uncommon but not unheard of. In 2014, Lucie Roussel, the mayor of La Prairie, Que., died after being stung at least 15 times in the garden of her home, despite never being diagnosed with an allergy.

Allergy specialists say it’s rare to have a fatal allergic reaction without previous symptoms, but it’s not uncommon to develop allergies at any stage of life.

David Fischer, president of Canadian Society of Allergy and Clinical Immunology, said about one per cent of the population is at risk of an allergic reaction to insect stings.

Cases like Koch’s are rare, as many patients have experienced hives or other signs of an allergy before.
“It is unusual to have the reaction the way it’s described … but certainly one per cent of the population could have a reaction to their next sting. The problem is you can’t really do any screening for that,” said Fischer.

Allergies can appear at any age, but Fischer said most cases of fatal or near-fatal reactions to insect stings involve adults over 40, when people are more likely to be on heart medications like beta blockers, or have an underlying narrowing of the coronary artery.

Dr. Donald Stark, an allergist and professor at the University of British Columbia, said the location of the sting can escalate the reaction. In Daniel Koch’s case, the wasp may have inserted the venom into an artery in his face, making him react more rapidly.

There is an effective allergy desensitization treatment for reactions to insect stings, and Stark said the treatment can be 95 per cent effective.
But there have been recent manufacturing problems for the treatment, making it difficult for patients to access.

Stark said this shortage, combined with the current shortage of adult EpiPens in Canada, puts patients with severe insect allergies in a bind, especially during a month when wasps are particularly active.

“It’s a double whammy because if you don’t have the desensitization we said ‘Well, you’d better carry an EpiPen so you know how to treat yourself,’ and now we’re having a hard time getting those as well,” said Stark.
“It is a big problem, and I’ve certainly got a lot of anxious patients.”

nymph of an assassin bug

larva of a scarab beetle
Scroll to top