How to kill fruit flies, according to a scientist

You are here: Home / Pest News / How to kill fruit flies, according to a scientist

How to kill fruit flies, according to a scientist 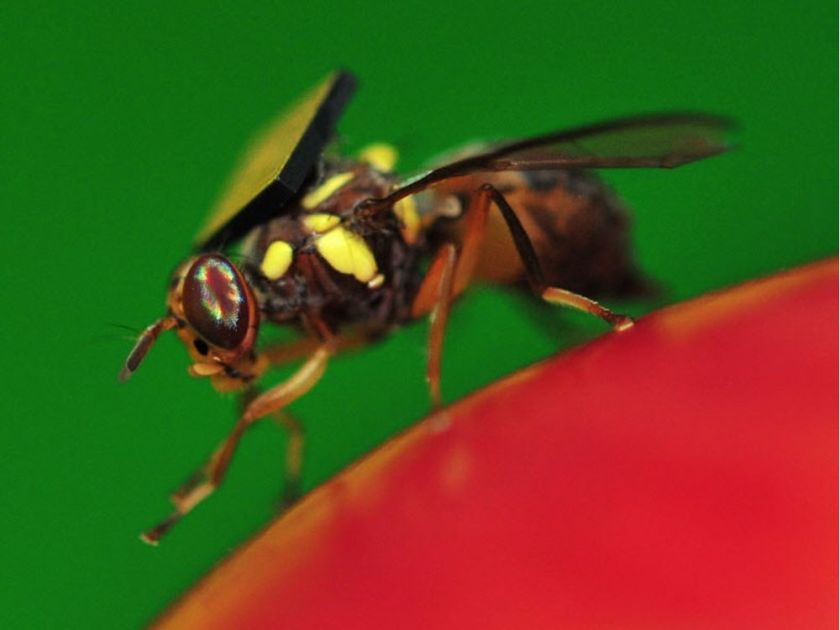 A handout photo obtained from CSIRO on March 21, 2014 shows a Queensland fruit fly with a 1.5-millimetre sensor attached to its back. Scientists have hit on a new way to combat one of Australia’s worst pests — create a male-only line. The eight millimetre-long Queensland fruit fly is so prevalent and adept at destroying crops it is threatening the nation’s 6.2 billion USD (6.9 billion AUSD) horticultural industry. Australian scientists at the government-run Commonwealth Scientific and Industrial Research Organisation are now exploring how feeding certain genes to larvae can alter the DNA so the flies grow into sterilised males whether they start out as male or female. CSIRO / AFP/GETTY IMAGES

This article was originally published on The Conversation, an independent and nonprofit source of news, analysis and commentary from academic experts. Disclosure information is available on the original site.

As a researcher who works on fruit flies, I often get asked how to get them out of someone’s kitchen. This happens to fly researchers often enough that we sit around fly conferences (these actually exist) and complain about getting asked this question.

Meanwhile, we watch the same fruit flies buzz around our beers instead of discussing pithy and insightful questions about the research that we’re pursuing.

But I get it: Fruit flies are annoying. So, fine, here’s how we get rid of them in my lab: We build a trap. It’s not perfect, but it’s OK.

1. Take a small jar (we use small canning jars) and pour in cider vinegar to about two centimetres deep.

2. “Cap” the jar with a funnel. You can use a plastic funnel if you have one, but a makeshift paper one works well.

3. Tape the funnel in place so there are no gaps for the flies to crawl out.

Flies fly in and can’t find their way out. Every day or two, replace the vinegar.

Instead of vinegar, you can also use beer or wine, but I prefer to drink one of these while making the traps.

There is actually a little science behind the trap. Fruit flies — at least Drosophila melanogaster, the most common fly buzzing around your bananas — are attracted to aging fruit, rotting fruit in particular. They lay their eggs there and the larvae hatch and feed on the soft, overripe flesh.

To find that fruit, flies use their sense of smell, what we call their olfactory system. What they are sensing, smelling, are things like acetic acid — the molecule that gives vinegar its pungent punch. So, you could bait your trap with fruit, but vinegar jumps right to the chase and lures them in.

The flies flying around your kitchen likely came from outside. Drosophila melanogaster are originally an African species, but they’ve spread across the globe. We call them a “cosmopolitan” species — they’re found wherever people are.

Where flies come from and why we research them

The story of how they’ve adapted to so many different environments (like, for example, the tip of Florida or even northern Ontario, where I live) is an interesting one and a hot topic of current research. The flies that buzz around my fruit bowl, at least in the summer and fall, likely came from a local population. I’ve actually done work on flies we collected from the composter in my backyard.

Interestingly, the combination of a tropical species, a cool day and a warm house is likely why there seem to be more flies in the fall. As the temperature outside goes down (and even on cool summer nights where I live), the flies come inside where it’s warm. Where do the flies go in the winter? We actually don’t know. We know they can’t freeze and live, so our best guess is they hide away in basements waiting for warm weather. There’s actually a name for this idea. We call it the “Root Cellar Hypothesis.”

The second question that I, and every other fly researcher, get asked is: Why flies? Good question. The first answer is: Because they’re small. Seriously.

Much of the research I do involves asking how individuals, or small groups of individuals, are similar and different. Asking this question is best done with thousands of individuals. An average experiment in my lab can involve tens of thousands of flies. Imagine doing this kind of work on zebras. That’s a lot of zebras. It also helps that flies grow quickly, reproduce constantly and are super easy (usually) to keep in the lab.

The second reason why we research flies is because they are strikingly similar to humans — or any other animal on our planet. Because life on Earth shares a common ancestry, we have all evolved in complex and interwoven paths from a common ancestor. We share much of our genetics and almost all of our biochemistry.

Sixty to 80 per cent of genes found in humans are found in flies, and essentially all our biochemistry and metabolism is identical. So when we ask a question using flies, we can answer a question that interests us about humans.

It is this relatedness, and the ease of working with them in the lab, that have led to research on flies being the foundation of no less than four Nobel Prizes.

Ironically, as I type this there is literally a fruit fly — Drosophila melanogaster — walking the lip of my coffee cup. The little devils are everywhere.

This article was originally published on The Conversation. Disclosure information is available on the original site. Read the original article: