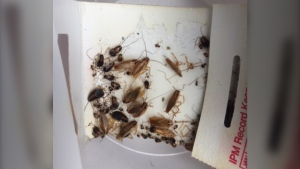 Health inspectors found cockroaches, similar to the brown ones in this file photo, inside the New Dynasty Restaurant this week. (Photo: AHS)

The AHS report states food was being stored improperly in broken plastic containers, wasn’t properly covered in coolers and certain high-risk foods, such as chicken, were not kept at proper temperatures.

Dr. Vivien Suttorp, Medical Officer of Health with AHS, says the public isn’t really at risk as a result of the restaurant’s closure. “This is more a proactive measure to prevent transmission of diseases or other risks that may come up with food compliance issues.”
Dr. Suttorp says cockroaches are not common in southern Alberta but they are found from time to time. “Cockroaches are interesting little critters in that they multiply very quickly, and they’re actually also nocturnal. So, even if we do an inspection, we may not see them, because they are not there in the daylight.”

The inspection report also noted that chicken was observed thawing in a sink and at least 20 packages of ribs had been left at room temperature to thaw.

The report states once the infestation has been resolved and the owners follow the requirements set out by a licensed pest control operator, the restaurant will be allowed to reopen.

Calls from CTV News to the owners of New Dynasty were not returned.