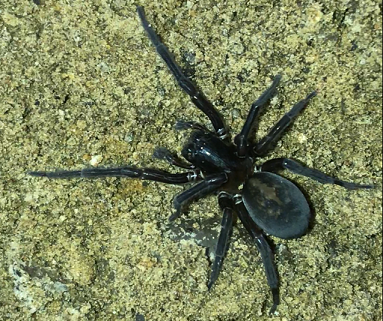 6852.         Large infestation found in a crawl space of the building. Hundreds living in the dirt around a pool of sewage caused by a disconnected waste pipe from the unit above. Size of average spider is about 1 inch. Toronto, ON. Canada

Number 6852. This is a hacklemesh/lace weaver (family Amaurobiidae); it looks like Amaurobius ferox, commonly known as the black lace weaver –  Click Here. They can bite, but the bite is not dangerous to humans. This is a matriphagous spider, meaning that the young devour the mother after hatching. After her young hatch, she lays a second set of eggs on which the newly hatched spiders feed. Then a few days later, she actively encourages her offspring to devour her.