Magpies are objects of disdain for many Edmontonians, despised for rude morning wake-up calls and a tendency to dive-bomb pets and children. But unusual and striking ‘ghost magpies’ living around the city are catching the attention of avid birdwatchers and passersby alike. 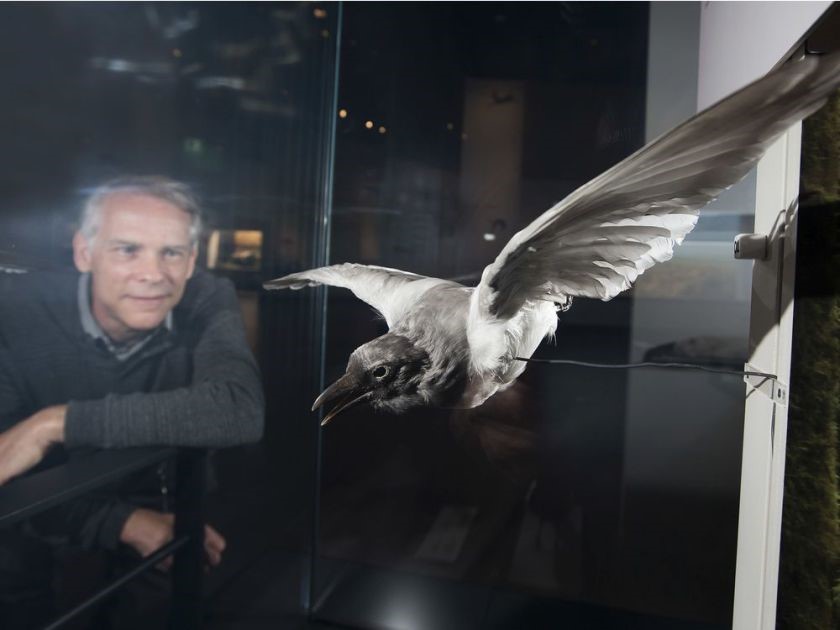 Ghost magpies are birds that, through a genetic mutation, exhibit imperfect albinism. The mutation means the amount of black pigmentation in their feathers is much lower than in normal black-billed magpies, giving them a distinct white-grey colouring and, curiously, blue eyes.

According to Royal Alberta Museum ornithologist Jocelyn Hudon, the phenomenon is highly unusual, and Edmonton could be called the world’s ghost magpie capital.

“They’ve been seen outside of Edmonton, the odd record of one in Calgary or Red Deer, or even way in the north or Saskatchewan. But there’s more in Edmonton than anywhere else,” he said.

Hudon discussed the topic from inside the museum’s natural history gallery, where a display houses a sample ghost magpie, juxtaposed by a normally coloured specimen.
The prevalence of the odd avians in Edmonton likely traces back to a single magpie that displayed the mutation many years ago, Hudon says. Over time, more birds have taken on the distinct quality or have carried the mutation, making ghost magpies a trademark of Edmonton’s urban wildlife.

“There’s a specimen at the University of Alberta going back to 1946. So they’ve been around for quite some time, and all the birds we see today are presumably descendants of that individual or its predecessors,” Hudon said, estimating 15 to 25 of the strange birds now live here.

The mutation that causes the discolouration is recessive, meaning that both parents must possess the ghostly gene for a child to inherit it. That means — much like humans don’t have to be left-handed to carry the recessive trait of left-handedness — there’s many normal-looking magpies in Edmonton that carry imperfect albinism.

Despite the odd appearance, Hudon says the birds behave much like any other magpie in the city. Imperfect albino magpies will mate with their non-ghostly counterparts, and they manage to stay clear of danger despite their striking appearance catching predators’ eyes.
Ede Karch, who lives just inside the city’s southeast border, managed to snap some photos of three such birds, who were nesting in her front yard, in mid-June. She’s been living at the property for 43 years, but this was the first time she’d seen one of the unusual creatures.

“My first thought was, ‘Are these albino magpies?’ I’d never seen anything like this before,” Karch said. She saw the birds a few more times over the next days, but they’ve been absent since, leaving no evidence aside from a single ghost-white feather.

While Karch is far from fond of magpies under normal circumstances, she enjoyed seeing the partially albino variation.

“They chase all the other birds away! We used to have dogs, and they’d come and eat all the dog food. They’re just noisy, raucous birds,” Karch said. “But these, I thought, they’re kind of special.”

Hudon is currently working on finding out more about the biology of ghost magpies. He recently banded a bird in Chinatown and has drawn blood from a few others around the city. His goal is to isolate the gene responsible for the difference in colour, in what would be a distinctly Edmontonian scientific achievement.

“This is iconic for Edmonton,” he said. “There’s no other place where we have these in these numbers.”

Larva of a lady beetle
Scroll to top