Blog - Latest News
You are here: Home / Pest News / ‘Astounding’ survey of fly species suggests we might be underestimating glo... 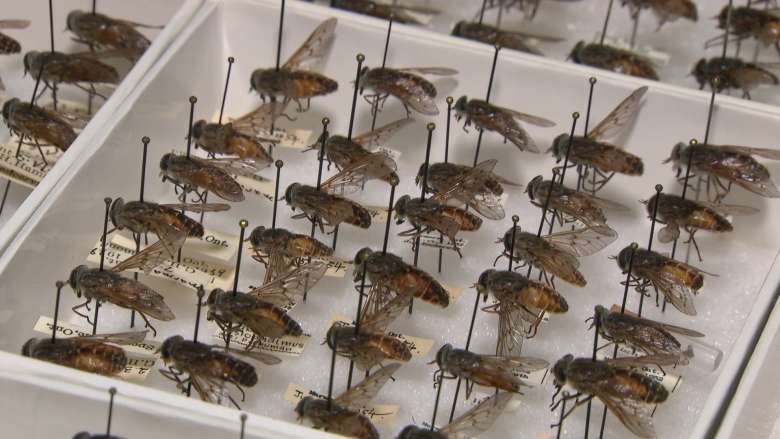 The world may have more species of flies than scientists previously assumed. (CBC)

A University of Calgary entomologist recently participated in a landmark study that revealed just how much we don’t know about the number and variety of species that inhabit our planet.John Swann was one of 59 biologists who spent one year collecting flies from a four-hectare patch of cloud forest in Costa Rica.

The “fly systematists” found what the study, published in the Zootaxa journal in March, describes as “an astounding” 4,332 in 73 families, and the scientists estimate there could actually be more than 8,000 species at the small site.

“The diversity … represents the most species-rich area of such limited extent yet discovered for this order anywhere on the planet,” the study reads.

Swann said the research is important not only for a better understanding of the role each species of fly plays in the ecosystem at large, but for getting a larger picture of biodiversity and extinction rates.

“We can talk about what is the size of a nucleus, but we can’t tell you to an order of magnitude how many species there are on our planet. “It’s our responsibility to help people figure out what’s out there.”

Local technicians sorted and prepared more than 52,000 specimens, which were caught in continually running traps. The flies were then examined by the team to separate them out based on “morphology,” or different identifying physical characteristics. Of those, 41,000 were identified and categorized.

The study also found the species were wildly diverse, suggesting that estimates of variety of fly species around the world are likely far too low. Beetles are known to be the most diverse order of insects, but the scientists said their findings suggest that there may actually be more varieties of flies than beetles.

“As it stands now, our knowledge is so limited that we will continue to flounder until such data are generated. It is difficult to relate to non-specialists how vast our ignorance truly is,” the study reads.

Swann said many people would likely be shocked to realize just how many new species are being discovering all the time. Out of the 26 species of flies he characterized in Costa Rica, only six were previously named.

He’s also discovered new species here at home, in Fish Creek Park and Kananaskis Country. There are estimated to be more than 23,000 species of flies in Canada.

The ecologist said studying flies might not seem as sexy as “save the wolves, save the whales” ecology, but it’s incredibly important to understand the diverse and vital role flies play in the biosphere.  “You name it, flies do it,” Swann said.

Flies play vital role in ecosystems
Flies make up 10 to 15 per cent of animals, and can play a variety of roles, including as parasites, decomposers and pollinators, he explained, contributing to the health of other groups in the ecosystem, like plant life or ant colonies.

In some colonies, the flies prey on ants or use them as hosts for larvae, thereby keeping the population in check, and in others, they act as a vital food source.

While the study was undertaken by professional entomologists, Swann said it demonstrates the importance of citizen science for biological surveying, like annual bird counts.

“This is the type of science that Darwin was doing … it can be doable by anyone,” he said.