You are here: Home / Fleas 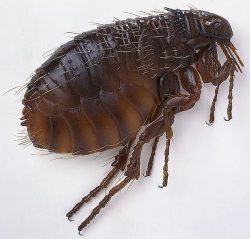 The need for flea control in most homes has been drastically reduced as a result of new
methods of treating pests with a flea problem.  The introduction and widespread use of insect growth regulators in the past decade has been a “miracle drug” for cats and dogs, the main source of household flea problems. To effectively eliminate a flea problem, an integrated management plan needs to be implemented.

The three steps to effective flea management are:

1) Treatment of infested pets.
Since most flea problems originate from an infested cat or dog, elimination of fleas from the pets is the first and most important step. Insecticides approved for direct application to pets as spot treatments, dips, dusts, sprays, or shampoos are available at most pet stores but veterinarians will almost always provide a product that will include a growth regulator.

2) Vacuuming and cleaning of infested premises.
Once the pet has been treated, efforts should then focus on the indoor premises. Particular attention should be paid to areas of the home where the pet sleeps or spends the majority of its time. Blankets or rugs that may be used as pet bedding should be discarded or laundered in hot, soapy water. All carpeted areas and upholstered furniture should be thoroughly vacuumed and the sweeper bag contents discarded. If the flea infestation is light, frequent and thorough vacuuming may reduce  the problem.

3) Spraying or dusting infested premises.
Moderate to heavy infestations will usually necessitate the application of a residual insecticide to carpets, baseboards, cracks and crevices, and other areas where fleas may be present. Good results can be achieved using products that contain a contact insecticide along with an insect growth regulator applied according to directions in all rooms in the home.. Spray treatment should be performed by a professional pest control operator. Because they guarantee their work it will likely cost less than attempting to do it yourself and having to repeat the process. A well trained professional will use the least amount of pesticide to give effective control.  Flea traps using light bulbs and sticky paper do capture some fleas but they are not an effective solution to eliminate an infestation.

Fleas are a universal pest, affecting all warm-blooded vertebrates from bats and birds to the family cat and rabbit. They can be hard to control and even harder to kill, but knowing some interesting facts about their life-cycle can make eradicating a flea infestation a little bit easier! 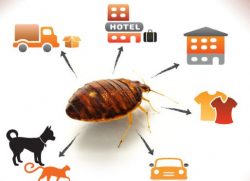 Fleas have 4 stages in their life cycle: egg, larva, pupa and adult.