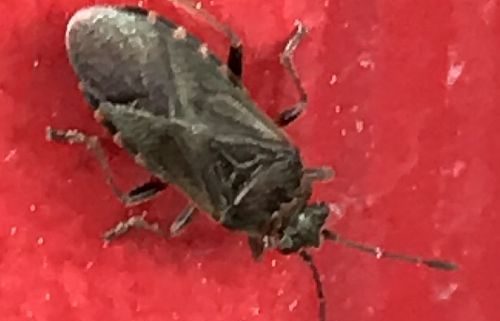 6072  Hello,   My name is Rachel. My husband and I recently moved to Vernon, BC. It’s July and we have noticed an abundance of these bugs on the outside of our house (photo attached), crawling around the edges of our windows and around the porch overhang and wooden garage door. They do seem to smell bad when squished, but when researching stink bugs, they don’t seem to look like your “average” stink bug. They start to come into the house via the poorly installed screens for our windows, which we have to fix. They’re bodies are about 1cm and they have wings. They also seem to have sort of yellow and black striped sides. I hope that’s enough info to identify these bugs!

This is an elm seed bug, a recent  immigrant from Europe (Identified in US in 2012).  They have become well established in the northwest US states and have apparently now moved into Canada.  Elm seed bugs feed mostly on elm seeds, but can be found on other trees.  Luckily, the bugs are not a concern for the health trees, but they have become a nuisance pest, similar to boxelder bugs, by entering homes and buildings in the spring, late summer and fall.  Read more:  https://extension.usu.edu/news_sections/agriculture_and_natural_resources/elm-seed-bug