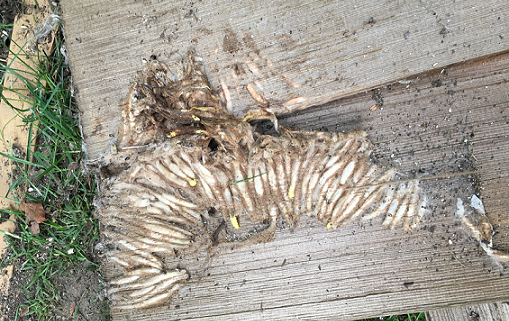 6832.       Can you help me identify these bad boys? They appear to be worms that I found stuck between cedar shakes that had stacked and half-buried in dirt under our front porch for many years. The webbing surrounding them was so sticky that it was very hard to pull the shakes apart and their bodies left indents in the shakes after I scraped them off. They only was I could tell that they were actually living creatures is because the little green heads on a few of them were wiggling. I Googled ‘worm cartridges’, but couldn’t find anything under this heading 🙂 Any idea what they might be?! Burnaby, British Columbia. Canada

Number 6832. These appear to be cocoons of a bee/wax moth, Aphomia sociella (Lepidoptera: Pyralidae). This is an introduced European species; possibly entered in bee hives. Click here for an image and additional information.