A North Carolina man has left a buzz in his community after driving about 65 kilometres on Tuesday with thousands of bees loose in his truck.

Wallace Leatherwood told ABC-affiliate WLOS he had purchased the bees in Weaverville from Wild Mountain Bees.

How they ended up swarming the cab of his truck was the result of him wanting to keep the bees cool while he stopped for something to eat.

“I put them in the back of the truck and went to look at a job … left there and went to Moe’s Original Bar B Que,” he said. “I didn’t have any shady place to sit them.”

Leatherwood moved three boxes of bees from the bed to the cab of the vehicle before heading in to eat.

When he left the restaurant, he was treated to a rather unbelievable sight.

“When I came out, [one of the boxes] was black with bees and there were bees everywhere. I thought, well, I don’t know what to do,” he said.

Since the bees had cost him $165 per box, he decided to get in with the bees.

While driving on Interstate 40, he made his way to his son’s workplace but recorded himself inside the car as he drove.

The bees could be seen on his windows and on one of the boxes.

At one point he also points at the bees, telling the camera “those are real bees.”

When he arrives at his son’s work, an employee there who works with Leatherwood’s son shot video from outside which shows him laughing.

“I knew he was crazy, but I didn’t know how crazy he was until he walked out,” said Brandon Singleton. “And, man, there was just bees everywhere.”

Despite all the bees, Leatherwood didn’t get stung the entire way home.

“It is dangerous. I know what you’re going to say, ‘Oh, you need to have an EpiPen and you should have a bee suit.’ Well, I don’t use a bee suit 99 per cent of the time, so I’m just cool with them,” he said.

Leatherwood did, however, get stung a few times when he removed the bees from the truck. But he said the bees are now safe in their home in Waynesville. 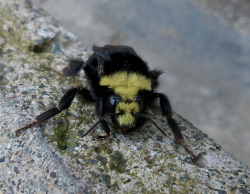 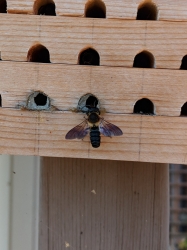 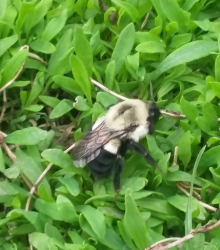