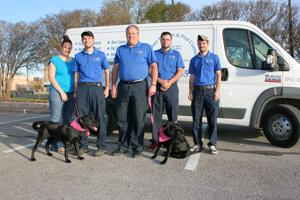 Randy Starr and crew found two dogs made bedbug hunting much easier after the canines were extensively trained to discover infestations.

One of the greatest feelings at the end of a long day is your head hitting a soft pillow. You close your eyes, begin counting sheep and relax your breathing. But while you are powering down, bed bugs are powering up. The carbon dioxide you exhale stirs them and alerts them that their next meal has come. They slowly, tentatively, make their way to you. What happens next is no surprise. The next morning, you awake with itching red spots. Some are in a straight line. Some are random spots. You have been bitten. Bed bugs are a pesky problem.
It’s a problem Randy Starr, of All Starr Termite and Pest Control knows all too well.
As a 35-year veteran in the industry, Randy knows first-hand the kind of physical and mental anguish bed bugs bring to families. He also understands the difficulty finding bed bug infestations, especially early on when the initial infestation may contain only a small amount of the pests. The solution the pest control expert found was bed bug sniffing dogs.

Working much like a drug dog, a bed bug dog is trained specifically to alert on the odor of a living bed bug. These dogs are so highly skilled that they can alert on a single young bed bug found beneath the cushion of a couch. There are only a handful of pest control companies that employ animals with this type of training. Randy has two such dogs, working with them to help identify and eventually alleviate bed bug infestations.

It isn’t just the dogs who are trained. Along with his other dog handler, Nate, Randy recently attended a three-day training session accompanied by his pair of dogs in Tooele, Utah. During the training dogs and humans alike learned the different stages the animals go through during an alert, how living bed bug odor can move from its source to different areas, and how to work the dogs so they can find their way to the source of the odor. They also developed an ongoing training plan with the trainer to continue improving both the handler and the dogs.

Randy is hopeful that by working with these dogs and utilizing every opportunity to train, he will be able to help serve his customers and community. Bed bugs are becoming a rapidly increasing problem in Texas.
In fact, All Starr Termite and Pest Control has seen the number of bed bug-related calls grow for five consecutive years. The pests are easy to pick up. Since only a single pregnant female is needed to start an infestation, and a bed bug can be picked up at a hotel room or found in used furniture.
Although bed bugs are not going away anytime soon, Randy and his pair of dogs are determined to stay in front of the fight. They’ve learned the landscape always changes with pest control.

Thankfully, according to Randy, the dogs adapt quickly.

Bug Populations Are Expected to Explode This Spring