You are here: Home / ANTS

Adult Males and Females
When ant colonies reproduce, the new queens and males may be found in the colony. These are “flying ants” and have two pairs of wings. Males generally have small heads, large eyes, large thoraces, and a pair of claspers at the end of the gaster. Once they fly (and mate), males do not live very long. After mating, new queens break off their wings and never fly again. Without wings, they can generally be distinguished from workers by their larger body size, larger thorax and larger abdomen.
All workers are females.

Immatures (different stages)
Ant larvae are white and grub like. They have no legs and don’t move about much on their own. You can generally see a large, dark stomach through their cuticle. Ant pupae look like white adult ants, with their legs and antennae pressed close to their bodies. In some species, larvae spin silk and the pupal stage is inside a cocoon.

Food
Most ants eat a variety of small insects that they capture, dead insects they happen to find, nectar, or honey dew. They need a balance of carbohydrates and protein. Protein is especially needed for the queen to make eggs and for the larvae to grow.

Habitat
Most ant species live in the soil. Some, like the carpenter ants, also live in wood (they excavate, but do not actually eat the wood). Some ants live in cavities made inside plants, such as acorns, twigs, and galls.

Predators
A variety of reptiles or amphibians (particularly toads and lizards), spiders, other insects such as assassin bugs, and other ants may prey on workers. Bats, birds, and occasionally, people capture and kill or eat the flying males and females.

Interesting Behaviors
Since ants are social they display many behaviors that remind us of our families and society. For example, worker ants take care of larvae by feeding and washing them. Ants are able to communicate with each other. They are able to communicate, among other things, directions (to where the food is) and alarm.

Some Ants are pests, some are beneficial
A few ant species are considered pests, because they live in and protect territory that we consider ours or because they want to consume resources that we need. For example, leafcutting ants  compete with us for crop plants in the American tropics. Fire ants colonize damp grasslands (including lawns!) with alarming ease. Carpenter ants, adapted for living in dead wood, consider the dead wood (lumber) in houses fair game, especially if it is damp. A number of opportunistic ant species can overrun kitchens, pantries, and pet food areas in search of suitable food items. Also, some ants (like their relatives the wasps and bees) have a potent sting. As with bees, some people can become hypersensitive to ant stings. 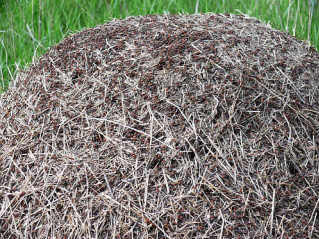 Thatching or “mound ants” get their name because they construct mounds from small sticks, grass stems, leaves and pine or fir needles. They may also nest in decayed logs. Under most circumstances, thatching ants should be considered beneficial, since they are fierce predators of other insects. However, when they occur in lawns, rockeries, picnic areas and other areas of human habitation, they can become a severe annoyance.
Thatching ants are often injurious to seedling trees or plants near their nests, and they have been known to damage the buds of apples, pears and other fruit trees in the spring. The landscape can be visually disrupted by the presence of their mounds. Physical contact with them is also displeasing, since they can bite quite hard and usually spray the area they have bitten with formic acid to produce a painful sensation which can result in a blistering of the skin if it is not washed.

An interesting phenomenon demonstrated by thatching ants, as well as other ants, is the habit of “herding” and maintaining aphid colonies on trees, shrubs and weeds. This occasionally leads to an aphid problem because, while keeping aphids for their sweet honeydew, they protect the aphids against natural control organisms such as wasps and ladybird beetles.

Be sure thatching ants are indeed a threat if you find their mounds on your property. Frequently, they do not pose a serious problem and no control is recommended.

Dusts: Thatching ant nests in buildings can usually be eliminated with boric acid, diatomaceous earth or pyrethrins. These can also be applied to cracks and crevices used by the ants as travel routes into problem areas. In addition to eliminating them in buildings, however, the ants should be followed to find other nests outdoors.

Thatching ant nests can also be eliminated using spot treatments of nests with residual insecticides registered for ant control. There is no need to apply residual insecticides to large areas outdoors. because  the entire nest surface and subterranean portion should be thoroughly treated this is not environmentally friendly.  Saturating the earth with pesticides may contaminate ground water.

What to do when ants invade your home