You are here: Home / ANTS / Carpenter Ant Identification and Control

Carpenter ants are one of the most valuable insects we have on earth. They chew up tons of wood and turn it into fine sawdust that rots and provides compost for new growth. Because they enter man made structures they are considered the most destructive  common insect pest we have in Canada.

FIVE ANT SIZES IN ONE TYPICAL NEST
(not actual size )

Two common species of carpenter ants found in Canada:  (There are others)
1. Modoc : all black. (Legs may have a rusty red color) One queen in parent nest.
2. Vicinus : black head, rusty red thorax (mid section) and black abdomen  (tail section.)  Multiple queens in parent nest.
Most carpenter ant species have other similar characteristics. See digital photos.
Five Sizes : Carpenter ants can be as small as one quarter inch or as large as three quarters of an inch. All sizes can be found in one nest. (See illustration above)

Most Carpenter Ant species establish their initial nest in decayed wood, but, once established, the ants extend their tunneling into sound wood and can do considerable damage to a structure.  These species commonly nest in standing trees (living or dead), in stumps, or in logs on the forest floor. Since many houses are being built in forested areas, well established, vigorous colonies are readily available in the immediate vicinity to attack these dwellings. This is especially true when the homeowner insists that the home be built with a minimal removal of trees.

Carpenter Ants typically have a parent colony in outside nesting areas, such as live or dead trees, stumps, logs or decorative landscape wood. When the colony grows larger and needs room to expand satellite colonies are established. These satellite colonies often develop in nearby structures presumably because they offer warm protection.The parent colony is often located in a tree, stump,  stacked wood within 100 meters of the house or wood and stumps buried in the yard when the house was constructed. Decorative wood  landscape ties brought in to enhance the beauty of a yard or driveway may also be the source of a parent colony. The colony does not produce reproductives (winged males and queens) until it is from 3 to 6 years old and contains about 2,000 workers. The natural food for these ants consists of insects and other arthropods and sweet exudates from aphids and insects. They are also attracted to other sweet material such as decaying fruits.

Only the  parent colony contains the queen(s), young larvae and workers, while the satellite contains the mature larvae, pupae, workers, and/or winged reproductives.  Ants move back and forth from parent nest to satellite nest but just a few ( less than 10 % ) will be visible foraging for food.
Sometimes they can be seen moving mature larvae (white and grub-like) or pupae (papery cocoons). Ants are generally active along ant trails from April to mid-October. These trails follow natural contours and lines of least resistance and also frequently cut across lawns. Traffic on these trails may be noticeable during the day, but peak traffic occurs after sunset and continues throughout the night.

Reproductive carpenter ants ( winged males and females ) leave the nest as early as January if the nest is in a heated structure. Those living outside in logs and stumps will not swarm until about early May. The fertilized queens must then find wet wood to establish a new nest, and the cycle starts over again.  See digital photos. 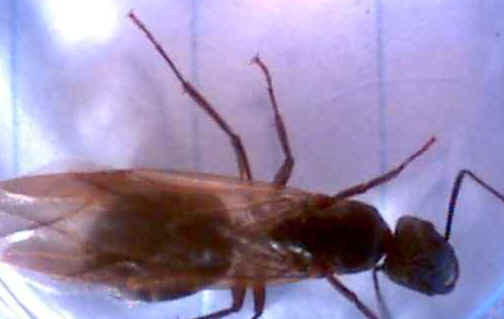 Reproductive females (future queens) The winged females  emerge from nests in the spring.  They will try to mate then seek a wet piece of wood to establish a new nest.  She will then pull off her wings and burrow into the wood where she will spend the rest of her life (15 to 20 years) laying eggs.  She has enough food stored in her body, including the wing muscles, to feed her first babies until they are mature and can bring back food for her and the next batch of newborns. The blue lines in the background are spaced 1/4 inch.  This ant is about 3/4 of an inch long, nose to wing tips.  She was captured shortly after emerging from a nest in the ceiling of a home, April 30, 2001. She was alive while modeling for this photo and would not stay in the centre of the lens. (Note: one of her antennas is missing) 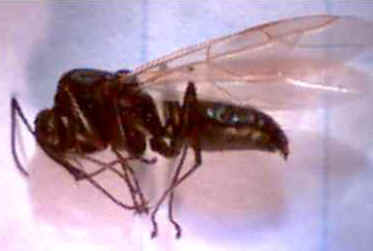 Reproductive males with wings emerge from nests in the spring to mate with the future queens.  Once they have fertilized a queen, they all die, probably of starvation.  The males do no work and are often pushed out of the nest by female workers at mating time.  Males are smaller than reproductive females.  The abdomen is long and slender.  The head quite small and the mandibles are very small.  They can not chew  wood.  They are harmless to the structure of a home but are usually the worst nuisance because so many of them are obvious flying toward windows during mating season. Their presence inside a home indicates there is at least one well established nest in the structure.

Carpenter ants have a single node (abdominal pedicel) between the thorax and abdomen. It is quite visible using a magnifying glass. 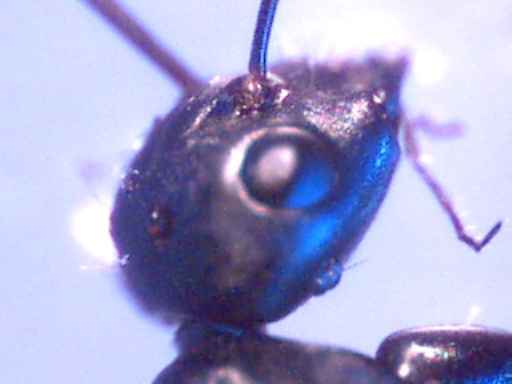 I  you study these girls long enough you can eventually get to love them.
They are very dedicated mothers and will lay about 70,000 eggs during their lifetime of 15 to 20 years. Once the first small brood is old enough to gather food, the queen does nothing but lay eggs. She never leaves her nest. When the nest gets too crowded, the workers will carry larvae to a new satellite nest where they are fed and cared for until they develop into adults.
Magnification: approximately 60 times

The antennae of ants are sense organs having the function of touch and smell.   They will often follow the pheromone trail laid out by other ants by touching their antennae to the surface they are crawling on.    If the antennae becomes contaminated with a foreign substance such as a pesticide,  they will attempt to clean them with their front legs.  Ants leaving nests in a building that has had  a pest control treatment are often observed performing this grooming behavior.  Different species of ants can be identified by the number of antennae segments.

First a word of caution.

Many pest control professionals consider Carpenter ants the most difficult pest there is to deal with in the industry. With all the training and experience they have, there are some homes that take considerable time and a number  of treatments to completely  eradicate these destructive insects.  Many homeowners will call in a professional after they have failed to solve the problem themselves.  This situation is usually more difficult to deal with because the homeowner randomly sprayed pesticides killing the obvious evidence and scattering the satellite nests.  Of course this increases the cost. If you are not prepared to spend hours in your attic  and crawl space wearing a respirator, rubber gloves, coveralls and a hat, then you may be wise to call a professional to do the job properly.
You can read the advice from a Canadian Government web site if you are determined to deal with carpenter ants yourself.

How to find the main nests  (and the queens):

In some locations it would be impossible to find all the main nests among the  trees, logs, stumps, buried wood and roots.  Even if these nests are found,  removing them can be a monumental task.  All satellite nests remain in contact with the main nest.  Workers can be seen carrying mature larvae from the overcrowded queen’s home to new or established satellites of the colony.  If you find the main nest, try to remove it physically.  If you put toxic products into it, they may leach into the ground water and contaminate water supplies or fish habitat some distance away.
If you can not remove the nest,  try to eliminate any favorable conditions that encourage them to move toward the home. Tree branches, fences, garden hoses,  structural wood touching the soil, landscape ties and utility wires all provide an easy route to follow.    A very fine dusting of diatomaceous earth around the perimeter base of the home will discourage all insects from crossing it to gain entry.   This is short term and should be repeated frequently in the spring, summer and fall. 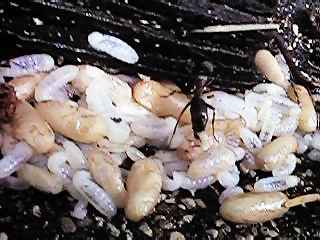 Toxic Sprays: Most pesticides available to the public will kill any insect that they come in contact with  while  still wet.  Once dry, the residual effect is minimal and has very little effect on insects.
Ant Dusts: Diatomaceous earth is sold in a variety of containers with convincing trade names. The basic product can also be purchased in much less expensive plain plastic bags at most garden stores.
Toxic chlorpyrifos is now off the market and illegal to use in Canada and U.S.A.
Boric Acid dust: It is very difficult to inject into a nesting cavity without proper equipment. Do not put it in exposed areas.
Ant Poisons sold over the counter at most hardware stores have little if any effect on carpenter ants
Ant Traps are actually not traps.  The little tin cans with holes in the side contain  borax.  They have no effect on carpenter ants.
Secret Formulas:  If you find one that works, patent it immediately.  Scientists around the world have been searching for years for ingredients that will attract and kill or repel  carpenter ants. Some things that homeowners have tried include cinnamon, cayenne pepper, moth balls, boric acid and icing sugar.
None of them have been proven effective.

Warning:
Boric acid is probably more toxic to humans than many other registered pesticides. Take a look at the Merk Index for boric acid and you’ll find human toxicity symptoms include: nausea, vomiting, diarrhea, abdominal cramps, circulatory collapse, tachycardia, cyanosis, delirium, convulsions, and coma. Death has occurred from <5 grams (the weight of a nickel) in infants and from 5 to 20 g in adults. The lesson is to treat all chemicals with respect and don't believe just because a compound is organic or natural it is safer than a registered and thoroughly tested substance. In fact it may be just the opposite.