You are here: Home / Ask an Expert / ‘Absolutely nuts’: Squirrels hid 200 walnuts under this SUV’s hood...

I told her to pop the hood and this is the picture that she sent me!” 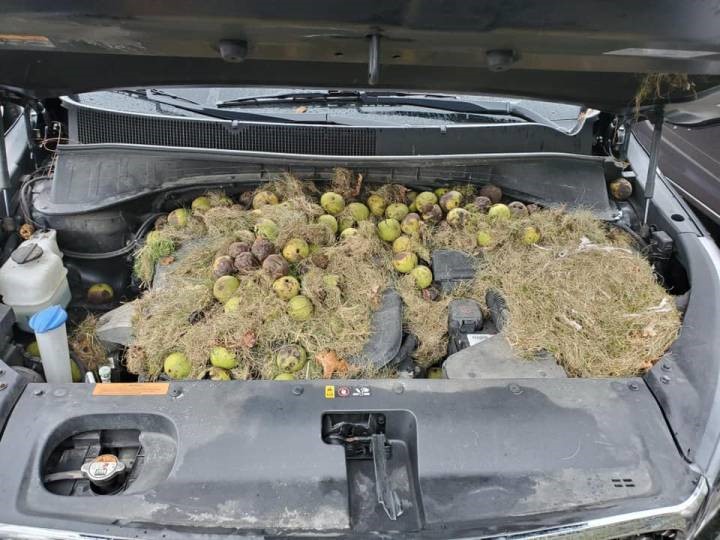 Several walnuts are shown hidden under the hood of Holly Persic’s SUV on Oct. 7, 2019. Chris Persic/Facebook

A Pennsylvania couple says they cracked up when they discovered the origin of a weird smell coming from the hood of their SUV.

It was nuts. Walnuts, to be specific.

Chris and Holly Persic say squirrels concealed more than 200 walnuts and several large clumps of grass under the hood of their SUV last weekend, much to their surprise on Monday.

Holly found the cache after she smelled something burning under the hood while driving to the library in Allegheny County, Pen.

“My wife called me from Northland Library and said that her car smelt like it was burning, and was making a weird sound,” her husband Chris wrote in a Facebook post.

“Rodents and vehicles do not mix,” Chris Persic wrote. He described the incident as “absolutely nuts,” and suggested there were probably enough walnuts under the hood for three winters.

“They were everywhere, under the battery, near the radiator fan,” Persic later told CNN. “The walnuts on the engine block were black and smelled like they were definitely roasting.”

Persic said it took him nearly an hour to clean out the nuts before taking the vehicle to a mechanic for a checkup. He added that he’s glad no fire broke out, and that it ended up being a funny story to share on Facebook.

“Long story short, if you park outside, do yourself a favour and check under the hood every once in a while,” he wrote.